The Road to Canonization: Father Capodanno

As we begin 2013, may I wish you all a Happy New Year, or more appropriately in Italian, Buon Capodanno!

I am most honored to compose this blog to share information about Father Vincent R. Capodanno, MM and his Cause for Canonization.  For seven years I have been privileged to serve as the Vice Postulator for Father Capodanno’s Cause, a project sponsored by the Archdiocese for the Military Services.  In this capacity I respond to correspondence with over 750 supporters worldwide, distributing prayer cards, processing financial donations and forwarding reports of answered favors (possible miracles) attributable through Father Capodanno’s interession.  And so in the advancement of his beatification and, God willing his eventual canonization, I provide this update that readers may learn about the progress of his Cause. 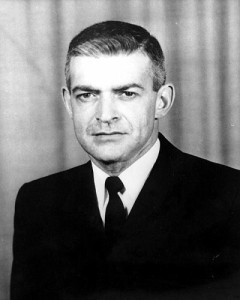 Since the official Servant of God proclamation in May 2006, a tribunal of clergy and lay people has convened and has assumed various responsibilities during this current diocesan phase.  The Promoter of Justice has conducted over 20 testimonies of people who personally knew Father Capodanno:  family members, Staten Island neighbors and friends, fellow Maryknoll priests, and Marines whom he served in Vietnam.  All of them have concurred in attesting to Father Capodanno’s innate holiness, humility and heroism.  Additional requirements will include theological censors reviewing any available writings of Father Capodanno as well as historical experts examining all written material about him.

Vincent Robert Capodanno, the youngest of ten children was born on February 13, 1929, in Staten Island, NY.  In 1949 he applied to and received acceptance to the Catholic Foreign Mission Society, the Maryknolls, and nine years later on June 14, 1958, he was ordained by Francis Cardinal Spellman.  Father Capodanno’s first assignment was in the mountains of Taiwan where he spent seven years, but after a brief furlough home, he learned of his transfer to Hong Kong, which elicited in the young priest a new response to God’s call of service.

In 1965 Father Capodanno sought permission to join the Navy Chaplain Corps with the intention of serving the increasing number of Marine troops in Vietnam.  After finishing Officer Candidate School, during Holy Week of 1966, he reported to the 7th Marines in Vietnam. As the chaplain for the battalion, his immediate focus was the young enlisted troops or “Grunts.” Later transferred to a medical unit, Father Capodanno was more than a priest ministering within the horrific arena of war. He became a constant companion to the Marines: living, eating, and sleeping in the same conditions of the men. Such work “energized” him, and he requested an extension to remain with the Marines. Granted  the extension of his tour, it was on September 4, 1967, during Operation Swift  that Father Capodanno made the ultimate sacrifice. After hours of heavy fighting from a North Vietnamese ambush and seriously injured, the chaplain sighted a wounded corpsmen pinned down by an enemy machine gunner. He ran to the Marine and administered medical and spiritual attention. Despite being unarmed, the enemy opened fire and Father Capodanno, the victim of 27 bullet wounds, died faithfully performing his final act as a good and faithful servant of God.

Posthumously awarded the Medal of Honor in 1969, Father Capodanno was also the recipient of the Navy Bronze Star Medal, the Vietnamese Cross of Gallantry with Silver Star, and the Purple Heart Medal. Soon after his death, the first chapel bearing his name was dedicated on Hill 51 in Que Son Valley, Vietnam; Chaplain Capodanno had helped build this simple place of prayer and peace that was constructed of thatched palms and bamboo. Several other chapels throughout the world bear his name.  Other memorials include the USS Capodanno, which was distinguished as the first ship in the US Fleet to receive a Papal Blessing while docked in Naples, and many other military buildings.

To better understand the virtuous life and sacrificial death of this good and holy priest, missionary and chaplain, I recommend his biography, The Grunt Padre by Rev. Daniel Mode.  Order it through CMJ Marian Publisher at 708-636-2995; the DVD based on the book is available through the EWTN Religious Catalogue at 800-854-6316.  You can find more information about Father Capodanno’s cause at the Archdiocese for the Military website.

If you are interested in obtaining prayer cards, or should you wish to report a personal account of how Father Capodanno has inspired you, please email me at mpreece@milarch.org or call my office number at 202-719-3642.

Mary Preece is the Vice Postulator for Father Capodanno’s Cause for Canonization, a project sponsored by the Archdiocese for the Military Services.

← Standing in a place I could have been
Honoring a Student; Honoring them all →

One thought on “The Road to Canonization: Father Capodanno”