In Honor of Their Comrades

They stood at The Wall, trading stories and sharing memories. 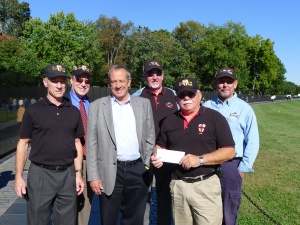 This group of five veterans had come to The Wall to present Jan C. Scruggs with a donation to the Education Center in honor of their fallen friends.

The idea was started by George Schulz of Alexandria, Va. and he made the recommendation to the 187th’s association board that they donate $1,000 to VVMF.

Joe Emerson, of Decatur, Ala., is currently the group’s president and said that the donation was in line with their mission and their members agreed.

While at The Wall, they chatted with Jan and told VVMF staffers about their experiences.

Imants Celtnieks of Wheaton, Md. said of his time in Vietnam, “You got used to it, You had to.”

He said that every day during monsoon season was a drastic change between hot and cold and his friend Schulz said “you could set your watch to it.”

“Everything was mud,” Celtnieks added.

While part of the unit in Vietnam, they all had call signs. Emerson was Crusader 2-9. The soldier he picked up the call sign for is on The Wall.

“Whatever needed to be done, we were there,” Celtnieks said.

Craig Bond added, “People appreciated not having to walk to a battle, we were their ride home.”

← The Legacy of Agent Orange
Before Vietnam →