Left at The Wall: Prosthetic leg symbolizes the lingering toll of war 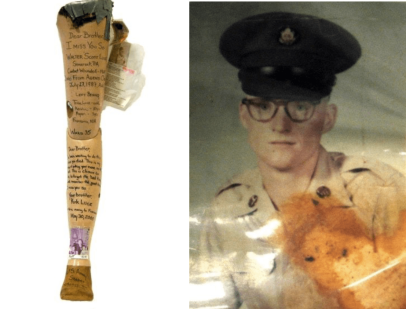 Prosthetic leg left at The Wall on May 3, 2000 and dedicated to Walter Scott Luce.

After the Vietnam Veterans Memorial in Washington, D.C. was built, visitors began unexpectedly leaving items of remembrance as a way of honoring those who served. Since the dedication of The Wall in 1982, more than 400,000 items have been left.

One of these items was a prosthetic leg, which was left at The Wall on May 30, 2000. The leg was affixed with messages, photographic prints and a typewritten poem dedicated to U.S. Army sniper and Vietnam veteran Walter Scott Luce.

The photographs attached to the leg depict Luce during his military service and subsequent recovery in Ward 35 at Walter Reed Army Medical Center, following the loss of his left leg in combat in 1969. Similarly, a poem entitled “Jungle” describes in graphic detail the dismemberment of a stray dog in a minefield on the outskirts of an American military outpost. The poem harrowingly foreshadows Luce’s own fate in the lines: “That night was foreshadowing / It would soon be my leg / My foot that I picked up like a stone.”

Luce’s brother, Kirk, writes that his death was due to complications from exposure to Agent Orange on July 27, 1987. He was 37 years old. Kirk also lists the names of immediate family members who were left behind in Franconia, New Hampshire following his death.

A note from Kirk is also written across the shin of the prosthesis and reads,

I’ve been waiting to do this since you died. This is my way if putting your name on the wall. This is closure for me, to forget the bad times and remember the good times. I miss you so.

A victim of exposure to toxic defoliants and herbicides rather than a direct combat casualty, Walter Scott Luce did not qualify under Department of Defense (DoD) guidelines to have his name inscribed on The Wall.

Kirk writes one final plea upon the foot of the prosthesis that reads,

Please Put My Name on THE WALL

This prosthetic leg is just one example of the enduring physical, emotional, and psychological toll of the Vietnam War upon American veterans and their loved ones. The artifact can be seen as part of VVMF’s virtual collection here. A prosthetic leg, representative of the one left at The Wall in Washington, D.C., is also on display with The Wall That Heals.

Prosthetic leg, representative of the one left in Washington, D.C., is part of The Wall That Heals.

The Vietnam War may be over, but the battle continues for many Vietnam veterans. Nearly 3 million service members served in Vietnam and most returned home. But since then, thousands of Vietnam veterans have fought illnesses related to Agent Orange exposure. This deadly toxin has impacted the lives of thousands of veterans and their families, but is largely unknown to most Americans.

Walter Scott Luce suffered the loss of a limb, a family, and a life never fully realized. His story is similar to the fight of thousands of our veterans and their family members.

Building awareness around the impact of Agent Orange exposure on America’s veterans and their families is at the heart of VVMF’s first-ever Agent Orange Awareness Day on August 10th. You can lend your voice and support by sponsoring a candle and leaving a personal message. Together, we can help bring light to those who struggle with the lasting effects of Agent Orange exposure.

← My Dad and Agent Orange: Why it’s personal to me