22 Things You Should Know About the Vietnam Veterans Memorial

Jan Scruggs stands in front of the first panel of The Wall. It was unveiled on July 22, 1982.

On July 21, 1982, the first panel of what would become The Vietnam Veterans Memorial, most famously known as The Wall in Washington, D.C., is unveiled. The completed memorial was dedicated November 13, 1982. And while you may know that it holds the names of the more than 58,000 fallen service men and women from the war, what else is there to know? A lot.

We’ve broken it down to 22 things you should know about The Wall.

22. The founder of The Wall is Jan Scruggs.

Scruggs was a wounded and decorated veteran of the Vietnam War, having served in the 199th Light Infantry Brigade of the U.S. Army. He felt a memorial would serve as a place of healing. Scruggs launched the effort with $2,800 of his own money and gradually gained the support of other Vietnam veterans in persuading Congress to provide a prominent location in Washington, D.C. He also founded VVMF, an organization that pursues a mission of preserving the legacy of The Wall, promoting healing and educating about the impact of the Vietnam War. 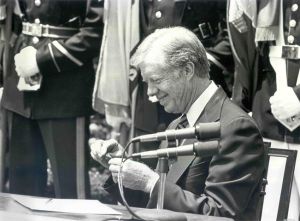 21. President Carter signed legislation to provide two acres of land for the Vietnam Veterans Memorial to be built.

On July 1, 1980, Carter made it official – the Vietnam Veterans Memorial was to be built on the National Mall. In his speech he said, “This is an important step toward the establishment of a permanent memorial for the young men and women who died in the service of our country in Vietnam; for those who, despite all our efforts, are still missing in Southeast Asia; and for all those who served and returned. We are honored to have a small part in offering this overdue recognition. They honored us and their country with their service, and no delay in recognizing them can lessen the value of their personal sacrifice.

20. 21-year old Maya Lin was the designer of the memorial.

s an undergraduate at Yale University when she mailed in her submission for the design competition on the last day it could be postmarked. Her design was number 1026, and she was selected unanimously as the winner by the jury. Lin wanted to create a park within a park, for people to reflect. More about her design here.

19. The Wall’s black granite was picked because of its reflective nature.

And it came all the way from India. One of the four major criteria for the design of the memorial meant it had to be reflective and contemplative in nature. To achieve this part, the designer Maya Lin chose these polish granite walls to create a mirror-like surface that reflects  images of the surrounding trees, lawns, and monuments.

18. The original design was highly controversial.

When it became known that The Wall would be built and hold the names of the more than 58,000 Vietnam fallen, there was a big outcry. Some veterans and political figures felt that The Wall was a “giant tombstone, also 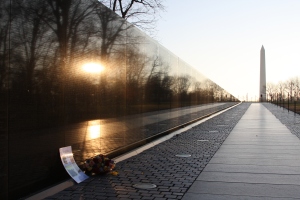 referring to it as a “black gash of shame.” For many, it was too abstract a design and people searched for a more heroic, traditional depiction of those who served.

17. No federal funds were used to build The Wall.

The Wall is a people’s memorial. It was built with money from individuals, corporations, unions and businesses. The total was $8.4 million dollars. Fundraising began in 1979. It was dedicated on Veterans Day, 1982.

16. The names are listed by date of death, starting at the apex. 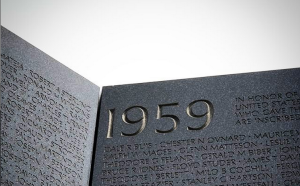 The apex of The Wall

The names on The Wall are  listed by date of casualty, beginning in 1959. The names are in chronological order, according to the date of casualty (which is not necessarily the date of death, but rather the date from the point of injury which led to the death). As prescribed by Maya Lin, this arrangement allows those servicemembers who died together to forever be linked.

15. Each name has a symbol designated next to it.

Each name is preceded (on the West Wall) or followed (on the East Wall) by a symbol designating status. The diamond symbol denotes that the service member’s death was confirmed; the cross symbol denotes the person was missing at the end of the war and remains missing and unaccounted for. The diamond symbol is superimposed over the cross when a service member’s remains are returned or otherwise accounted for; and a circle — as a symbol of life — would be inscribed around the cross should a serviceman ever return alive.

14. Names are added every year.

Every year, VVMF works with the Department of Defense to make sure that The Wall is accurate. When MIAs are recovered in Vietnam or when an appeal has been approved for addition to The Wall, VVMF makes the appropriate changes. Name additions have m 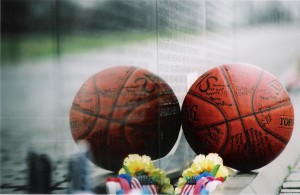 et the Department of Defense criteria for addition to The Wall, having sustained wounds in Vietnam from which they eventually perished. Information on how to add a person to The Wall can be found here.

13. Items left at The Wall are picked up at the end of every day.

Since its dedication, more than 400,000 items have been left in remembrance at The Wall. Items picked up are stored at a National Park Service facility.

12. The names of eight women are inscribed on The Wall.

11. There are some errors. As many as a couple dozen Vietnam veterans have names on The Wall, but were alive when their names were inscribed. There is no definitive answer to exactly how many, but there could be as many as 38 names of personnel who survived, but through clerical errors, were added to the list of fatalities provided by the Department of Defense. 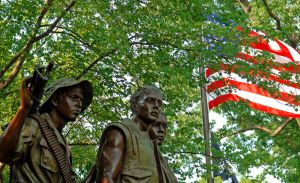 10. The Three Servicemen Statue, Flag Pole, Vietnam Women’s Memorial, and In Memory Plaque all make up the Vietnam Veterans Memorial.

Aside from The Wall, there is more to the Vietnam Veterans Memorial. The Three Servicemen statue is the result of the controversy surrounding Lin’s original design. This was a more heroic, life-like depiction of a soldier. It was dedicated on Veterans Day, 1984 with a flag pole. In 1993, The Vietnam Women’s Memorial was dedicated. Thousands of women volunteered to go to Vietnam, and this is the only memorial that honors women’s patriotic service was dedicated in the nation’s capital. Finally, in April of 2000, the In Memory Plaque was authorized by Congress to be added. The plaque is intended to honor those who died as a result of exposure to Agent Orange or PTSD, but are not eligible for placement on The Wall due to Department of Defense policies. It was dedicated on November 10, 2004. For more information, click here.

9. There is a traveling replica of The Wall.

In all honesty, there are many Wall replicas that cross the country to bring healing to thousands. However, only one is associated with The Wall in D.C., The Wall That Heals.  Unveiled in 1996, it travels with a mobile Education Center, showing photos of the fallen and memorabilia left at The Wall.

8. The Wall brings an average of 4.5 million visitors every year.

The Wall is one of the most popular monuments in Washington, D.C. and the most visited, second to the Lincoln Memorial.

7. Ceremonies at The Wall are held every year, hosted by VVMF.

VVMF hosts ceremonies on Father’s Day, Mother’s Day, Memorial Day, Veterans Day and during the Christmas holidays, which allow the public throughout the year to remember and pay tribute to friends and loved ones whose names are inscribed on the Memorial. Learn about them here. Also, VVMF hosts school groups throughout the year. For more information on VVMF’s role in education, click here.

6. The Department of Defense makes the decision of who gets added to The Wall.

VVMF receives numerous requests each year from individuals who want to have particular names placed on the Memorial. And while VVMF finances the addition of names on The Wall, VVMF does not determine whose names are to be inscribed. It is the Department of Defense that makes these difficult and often very technical decisions.

There are 70 separate panels (plus a panel at each end without names) on each wall, totaling 140 panels of names. The list starts and ends at the vertex, or middle, of the Memorial. Beginning with the year 1959 inscribed at the top of the panel on Panel 1 East (1E), the listing goes out to the right, to the end of the East Wall, Panel 70 East (70E). It resumes at the end of the West Wall, Panel 70 West (70W), and continues to the right, to Panel 1 West (1W), with 1975 inscribed at the very bottom.

4. VVMF holds a “Reading of the Names” for the names inscribed on The Wall every five years.

The first reading, in 1982, took three full days and began a healing process that focused the nation’s attention away from the war itself and toward the warrior instead. VVMF held its most recent reading of the names ceremony in 2012.

3. Veterans began guarding The Wall shortly after it was dedicated, to prevent damage and vandalism.

When The Wall was first erected, veterans began standing watch over it to protect it from vandalism. Today, there are dozens of Wall Volunteers who assist visitors with questions, give name rubbings, and offer general knowledge about The Wall’s being and structure. Learn about the volunteers here.

Wall Volunteer Annmarie touches The Wall before she makes a name rubbing during Memorial Day weekend, 2014.

2. Wall washings occur every Saturday between April and November.

The National Park Service (NPS) and VVMF work together to make sure the three-acre site the Memorial sits on is properly taken care of. NPS organizes and schedules washings every week from volunteers and veterans groups, when temperatures permit it – when it is above freezing.

1. The Wall will one day be complemented by the future Education Center.

Currently in the fundraising stages, VVMF is working to build an Education Center. The Center will be an interactive learning facility on the National Mall where our military heroes’ stories and sacrifice will never be forgotten. The Education Center will feature the faces and stories of the more than 58,000 men and women on The Wall and honor America’s Legacy of Service, including those serving in our nation’s Armed Forces today. And just like The Wall, the Center will be built with private funds – by supporters like you. To learn more and donate, click here.

← The Things He Left Behind: A Sister’s Emotional Journey to Honor Brother Through His Art
After hosting The Wall That Heals, San Diego Declares Aug. 4 “Vietnam Veterans Memorial Fund Day”d →