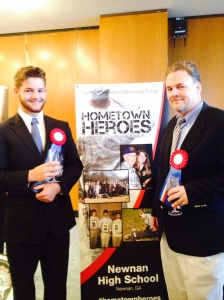 Meet Stephen Quesinberry, an 11th grade teacher and Department Chair of History and Social Studies at Newnan High School in Georgia. Stephen has been involved with VVMF for a number of years. Most recently, his involvement has included the Hometown Heroes Service Learning Project, a curriculum that connects students to veterans’ stories. Stephen and his student, Tyler, represented one of five other schools who came to Washington, D.C. to showcase their pilot work at VVMF’s Hometown Heroes Launch Event in 2014.

The Hometown Heroes service learning project’s main objective is to collect the photos and stories of those who served and sacrificed during the Vietnam War and other military conflicts. The curriculum involves remembering those who sacrificed, preserving their stories, commemorating veterans, and understanding healing through memorials.

To remember those lost to Vietnam, students in Stephen’s class began collecting photos of every service member KIA from Coweta County in Georgia. These photos were eventually submitted to each service member’s Virtual Wall of Faces page, along with remembrances for each. Photographs of every service member from Newnan were not only put on VVMF’s Virtual Wall, but were displayed around Stephen’s classroom. This not only personalized these hometown veterans, but brought a sense of community to the students every single day. 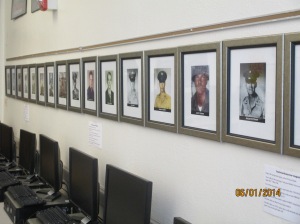 Stephen’s class also visited two local memorial parks. One memorial was dedicated to the two Medal of Honor recipients from Newnan, and one was dedicated to those who died in Vietnam. It also consisted of plaques and bricks commemorating every veteran from Coweta County who made the ultimate sacrifice. Newnan students came to find that more than sixty people died from their hometown in WWII. Three local veterans died in Korea, more than twenty-three died in Vietnam, and eight died since the war on terror began in 2001. These visits allowed students to understand commemoration and healing through memorials.

Tyler Vermilya, a rising senior at Newnan High School explained that his favorite aspect of the Hometown Heroes project was visiting the veterans’ memorial park.  Tyler stated, “It was very cool to experience these Hometown guys.”

In fact, one thing that shocked both Stephen and Tyler was that the two Medal of Honor recipients, both from Coweta, were given the Medal of Honor from President Johnson at the same time. However, the two recipients had no idea they were from the same hometown until they both showed up!

When asked about the importance of Hometown Heroes, Stephen responded, “Students don’t usually think of their local area having people that were “heroes”…. Whether a teacher can take them to a local memorial and tell the story of people that actually made history, or have a local veteran come in and tell them about their experiences in the war, it makes it come to life for students – it becomes real.”

Stephen has been dedicated to preserving veterans’ stories since before working with Hometown Heroes through a program called Vet-Connect. 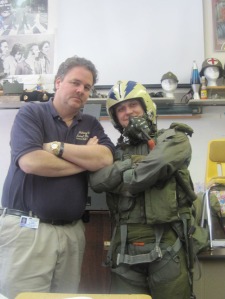 Stephen and student – a guest speaker that was a Navy F-4 pilot dressed the student up in the his flight gear – the kids LOVED it!

During Vet-Connect, Stephen would bring students and veterans together to ask questions and take oral histories, which meant a lot to those veterans involved. Vietnam veterans have told Stephen that they “cannot believe that these kids want to listen, are polite, and want to learn about what they did…which they didn’t experience when they came home.”

In addition to Newnan High School being so close to the Jackson-Pless National Guard Armory, Stephen had his students take a look at actual Vietnam-era weapons and machinery, in addition to grabbing history from veterans’ first-hand stories.

With the ideas from Hometown Heroes, teachers can expand VVMF’s lesson plans into their own programs like Stephen exemplified through Vet-Connect. When the programs are made to be interactive and personal, students realize that not all history is in books.

Tyler added, “The guys who made our history are still all around us. ” 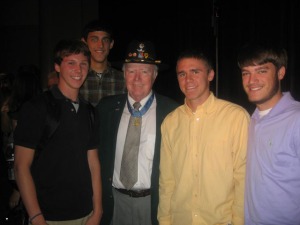 Programs like Vet-Connect not only connected Newnan High School with Vietnam veterans, such as Medal of Honor recipient Bruce “Snake Crandall,” but also current veterans.

Stephen reflected on his students involvement in the classroom saying, “Suddenly, the place they live is IMPORTANT.”

Hometown Heroes has given a sense of responsibility to these Newnan students. The project’s clarity and purpose of its mission were spot on, well-received, and offered valuable learning tools to teach students about those who served.

Stephen would remark enthusiastically, “That is what a teacher loves to see!”

Stephen also said he was ready to begin the Hometown Heroes curriculum next year, as well as recruit other educators to participate in the program. 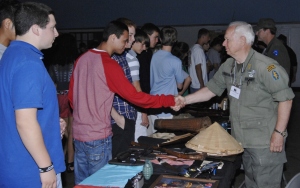 Newnan’s Student-Vet Connect program that is done at the end of each term. This past May, Newnan brought close to 1000 students through to talk to 91 veterans.

VVMF thanks all who were involved at Newnan High School for their amazing, dedicated work. The oral histories of our veterans are crucial to preserve. Fewer than 850,000 Vietnam veterans are estimated to still be alive today.

Listen to the podcast  by Stephen and one of his students, Tyler Vermilya. They offer their insights, takeaways, and lessons learned from the Hometown Heroes Project.