A Hero’s Welcome: How a pilot missing for 52 years came home

On March 15, 1966, Stewart was the pilot of a two-seater F-4C aircraft. It was the second in a flight of two on an armed reconnaissance mission over northern Vietnam. The lead aircraft spotted two vehicles as the flight approached the target area and Stewart responded he was going to strafe the trucks. The lead aircraft, while maneuvering to engage the targets, lost sight of Stewart’s aircraft, but saw a bright orange explosion over the trucks. Attempts to contact Stewart’s aircraft were unsuccessful. He and the flight commander, Martin Scott, were declared missing in action.

It would be more than five decades before the Stewart family received answers.

Peter J. Stewart was born on August 12, 1918 in Glasgow, Scotland. He later immigrated to the United States and was raised in the New York City borough of Queens. He married his wife, Marnie DeHaven, from Winter Haven, Florida, and had six children. Stewart’s service spanned three wars where he flew ‘fighters’ in WWII, Korea and Vietnam.

Bill, the youngest son, was six years old when he last saw his father. He remembers the moment a military officer and chaplain arrived at the home to deliver the devastating news.

“I remember the blue Air Force car pulling into the driveway of our home in Virginia,” Bill said.  “I could tell something wasn’t right.”

The family was told not to talk to anyone about the incident in case it put Stewart in more danger.

“It took another four years for me to understand that he was gone and what that meant not having my dad be a part of my life,” Bill said. He would continue to feel the sting of his father’s absence throughout his life.

Each of the six children dealt with the loss differently. They helped one another and supported their mother.

“She loved being an Air Force wife and taking on the responsibilities associated with and expected of her,” Bill said. “She is as deserving of the medals of the highest honors as Dad was.” 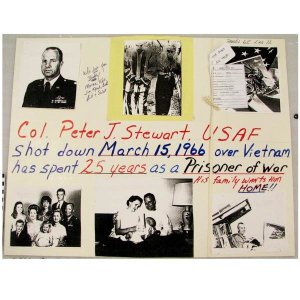 In 1991, a poster was left in Stewart’s honor at The Wall in Washington, D.C. The poster bears photos of Stewart in his military aircraft, candid scenes of his family life, and a single image of Stewart as a POW in Vietnam. A handwritten inscription on the front says, “His family wants him HOME!!”

Nearly 30 years after the poster was left, Bill says it encapsulates feelings of confusion the family was dealing with. Reports of his status had changed from missing to presumed dead, but they were also shown pictures indicating he could have been in captivity.

“At the end of the day, we wanted to let people know that the war was not over, he and others could still be alive, families were suffering, and nothing was being done about it. Other families of missing were sending similar messages.  Were our missing warriors being forgotten?”

In 2018, Stewart’s remains were discovered during an excavation by the Defense POW/MIA Accounting Agency. Shortly after, Stewart made the journey home. There to welcome him at the Tampa airport were his 94 year-old widow, six children, and family he never got the chance to meet.

“He was being honored with a hero’s return. And my mother, still alive today, welcomed him home,” Bill said.

He remembers the poignant moment his father’s flag-draped casket came off the plane.

“I had grieved over his absence multiple times in my life,” he said. “I thought I was through.”

More than 160 Patriot Guard motorcycles escorted the family from the airport. The Polk County, Florida Sheriffs led the way, stopping traffic in both directions for the motorcade. Local citizens pulled over, got out of their cars, and saluted the family as they drove back to Winter Haven.

Bill’s childhood friend and classmate, Major General Dennis Polumbo (USAF), agreed to receive the flag from the coffin and give it to Bill’s mother.

“Dennis assured me several times over many years, that they would bring Dad home one day,” Bill added. It was an act of honor he will never forget.

While the Stewart family found some peace knowing their loved one returned home, other families still wait. More than 58,000 Americans lost their lives in the Vietnam War and approximately 1,500 service members remain unaccounted for. Their names are inscribed on The Wall in Washington, D.C.

Each spring, VVMF works with the Department of Defense to make updates to The Wall. Service members who were repatriated the year prior have their status symbols changed. The remains of nine service members, including Stewart, were repatriated in 2018 and their statuses were changed on The Wall the following year. They were officially welcomed home on Memorial Day. Bill made the trip to Washington, D.C. for the ceremony.

Bill has visited The Wall several times over the years reflecting, grieving and praying. 2019 would be different. He would see his father’s name with a status confirming he was home.

At the start of the ceremony, each name was read aloud. Family members in attendance were escorted to their loved one’s panel. Bill Stewart was escorted to Panel 6E by U.S. Air Force Brig. General Sharon Bannister, whose dad went missing in 1972. His remains were later repatriated.

Bill Stewart touches the name of his father, Peter Stewart, during the 2019 Memorial Day Ceremony at The Wall.

“Our fathers had similar situations, both flew F-4s and were MIA’s, and now both with repatriated remains, buried in home soil,” Bill remembered. “She walked with me to dad’s panel on the The Wall.  I shook and cried like I did every other time I visited that incredible shrine.  She assured me that it never gets easier.”

Sharon Bannister and her sister, Rebecca Rusch were the keynote speakers that year. Their words helped him understand that the burial doesn’t always bring closure.

“There is a huge part of my heart missing, 52 years of my life without him, worrying about him and the conditions he experienced all the way to his final moment on earth,” Bill said.

Stewart is now home on American soil and his status is confirmed on The Wall. The name of Peter Stewart will be forever memorialized alongside the more than 58,000 service members etched in black granite. He is revered at the place our nation has set aside to remember Vietnam veterans.

“It’s not closure, or the end for me,” Bill reiterated. “It’s really the beginning of another journey; one to heal, to grieve with reality, to forgive, and to be grateful for our freedoms and the sacrifices of soldiers and families that make them possible.”

← Heroic story of William H. Pitsenbarger told in ‘The Last Full Measure’
591 Vietnam veterans to be honored through the In Memory program in 2020 →