A family changed forever: Honoring a brother killed in Vietnam

Richard B. Murphy, known as Dick to all who knew him, was the second of ten children in a large Irish-Catholic family. They hailed from Norwood, Massachusetts where their dad was the police chief. The Murphy’s were close-knit and well-known around town.

Brian, the eighth youngest, admired Dick in every way a little brother could.

“He was strong, physically and morally. He was conscientious, caring, and courageous,” he said. “He was protective of those weaker and more likely to be bullied or taken advantage of. He was a terrific big brother, and he was a lot of fun.”

One of Brian’s fondest memories was in April of 1967 when they both sat listening to a Red Sox vs. Yankees game on the radio. It was rare to have alone with any of the older kids, so he cherished it. Dick was set to leave for Vietnam in two months after enlisting and being sworn into the U.S. Marine Corps. The two didn’t speak of the war, but Dick turned to Brian and told him he would have to rely on letters to know what was happening with the Red Sox while he was at boot camp.

“So that became my job – to keep him informed,” Brian beamed.

Eight months later, Brian looked for Vietnam on the family globe. He had been told his older brother was going to Southeast Asia to fight for people who wanted to be free.

By the third week in May of 1968, Dick was nearing the midpoint of his tour. He had been wounded twice and seen a lot of death. In a photo that was sent home, Dick is shown with his fellow Marines. Three men behind him were wounded in a battle where Dick emerged unharmed. “Their war was over,” Brian wrote.

On May 23, 1968 Dick took pen to paper and wrote to a family friend who for many years had been their parish priest at St. Catherine of Sienna in Norwood. The following letter was written to Father Paul McManus. In this letter, Dick wrote about faith on the battlefield.

Just a couple of lines to say hello. The time in Vietnam is passing, sometimes fast, sometimes slow, but the clock keeps right on ticking.

As much as we all hate war we know this war must be fought. Many have died already and if peace talks don’t get off the ground soon, many more will die.

Sometimes a mood of depression falls over me and home seems so far away, but as I said, “The clock keeps right on ticking.”

I’ve heard the big shots mouth off about his lack of faith in God, but when the chips are down, he’s in his foxhole praying like the rest of us.

In a combat zone, faith is important. Sometimes faith and the weapon in your hand are the only things that keep you alive.

Thank you for your prayers. My prayers are with you and your parish. Please say an extra prayer for my mother. I know my being in Vietnam is hard on her. I worry about her.

I didn’t have to leave home to know I had the best father and mother in the world. God bless them. 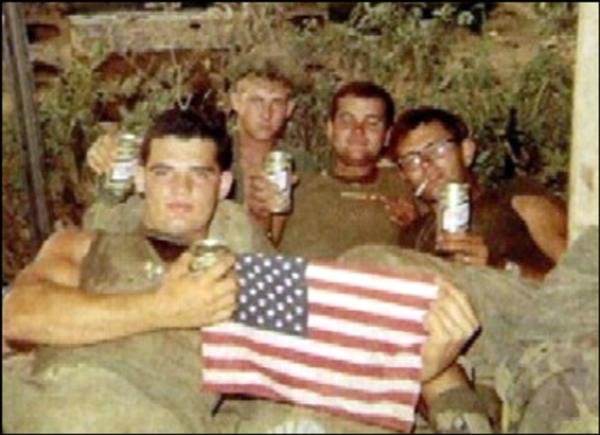 Richard is on the left, with the American flag he carried with him in Vietnam.

It took four days for the news to reach the Murphy family – it was Brian’s last day of fifth grade.

“The day we were notified was the last day of school,” Brian said. “Any Gold Star family member can tell you the day you are notified changes everything forever.”

Brian remembers getting ready to cross the hall to meet his sixth grade teacher, Mrs. Grace Gavin, when the principal appeared in the classroom’s doorway.

“The glare of his spectacles settled on me as he spoke to Miss Walker,” he recalled. “She approached me as he waited at the door. I went to him. He simply told me to collect Jack, my brother in the third grade, and to go directly home. I did not know the reason.”

Brian left immediately. It wasn’t until he was nearly home that he thought Dick might have been hurt in Vietnam, or worse. He was set to celebrate his 11th birthday two days later.

His dad, then Chief of Police, had been notified at the police station that Dick had been killed in Vietnam. Calls went out to reach the family, including the three oldest children. Jimmy, Kevin, and Billy were quickly located. Sheila and Tommy were pulled from classes at the high school. Maureen was taken from junior high.

“They all knew,” Brian recalled.

Their mother was out with Paul, the youngest, who was a few months shy of his fifth birthday. His dad had available cruisers sent to likely locations where she might be shopping. The news spread like wildfire in the small town, and bad news seemed to move even faster.

The kids were all home when their mother pulled into the yard.

“The saddest sight I ever saw was her learning Dick had died,” Brian said. “It would be eight days before he would be home.”

Dick’s body was escorted back from Vietnam. There were three days of visitation and then the funeral. Father McManus returned to Norwood and read the letter Dick wrote to him. Police officers and Marines stood vigil at the funeral home. The church, with a capacity of 900, overflowed with guests. 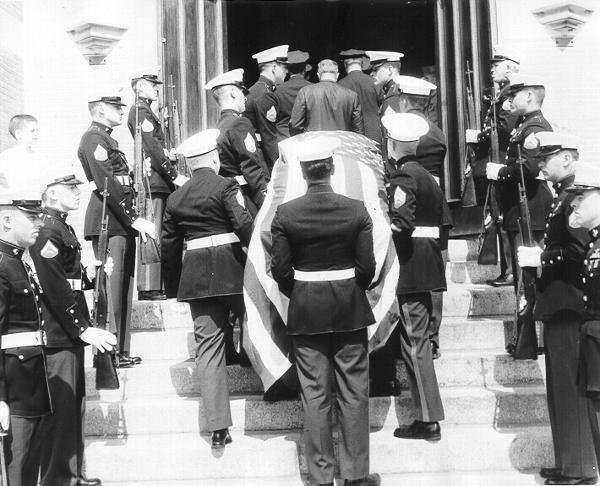 The funeral of Richard B. Murphy with Marines forming a line as his casket enters the local church.

Then the family endured a spring and summer without him.

“The spring of 1968 was very hard on our small town,” Brian said. “Dick was the third man lost in Vietnam in a period of twelve weeks. Johnny Fitzgerald and Pat Burke were they the other two. They all lived in the same part of town.”

Dick was laid to rest a half mile from the family home at Highland Cemetery in Norwood, Massachusetts. That summer, when members of the family went to the cemetery, someone was visiting Dick’s grave.

Brian has been fortunate to connect with Dick’s former comrades over the years.

During his six month stint in Vietnam, the family sent 19 care packages. They always added items for Dick to share, and he and a few friends would write to each other’s parents.

“When Dick was killed, we heard from several of his buddies,” Brian said. “Naturally, those letters would stop and I would begin to wonder whether anyone thought of Dick today.”

With the help of the internet and social media, Brian has found websites with tributes to his older brother. The family has since made contact with those who served with him and began attending reunions.

“It is good and healing for Dick’s buddies to see us and understand we are okay,” Brian remarked. “We suffered a horrible loss, but we persevered.”

Five siblings have attended eight of Dick’s reunions and met twenty or so Marines with whom he served. Brian hopes that these meetings have helped some of them let go of their survivor’s guilt. 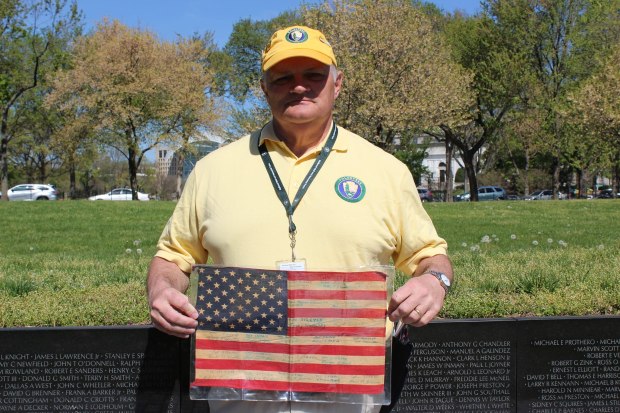 Brian Murphy holds a flag that his brother, Richard, carried in Vietnam. It is signed by his comrades and was sent home after his death.

While Dick is honored through the memory of his comrades, he is also memorialized on The Wall in Washington, D.C. His name is inscribed on Panel 57W, Line 29. Whenever Brian visits, he makes it a point of reflection. He became a Vietnam Veterans Memorial Volunteer in 2015 and travels to the nation’s capital numerous times a year with his sister, Maureen. They assist visitors by finding names, offering support, and participating in annual events hosted at the Vietnam Veterans Memorial. Brian often leaves a photo collage of Dick and his comrades at his panel, and one time, brought a tethered flag. Dick brought a small American flag everywhere he went in Vietnam and when he died, it was returned to the family with the signatures of 21 of his comrades. Brian and Maureen have also taken opportunities to volunteer at The Wall That Heals, VVMF’s traveling Wall replica.

A collage of Richard Murphy and the comrades who died alongside him is left at Panel 57W, Line 29 of the Vietnam Veterans Memorial.

Brian’s tenacity in honoring the more than 58,000 names on The Wall led him to be the 2019 recipient of VVMF’s Libby Hatch Award. The Libby Hatch Award recognizes a volunteer for their outstanding commitment and tireless effort in preserving the legacy of the Vietnam Veterans Memorial. For Brian, volunteering at The Wall gives him the chance to remember the 58,276 men and women who gave their lives in service. Dick is just one story of a life cut short, with a family forever altered by his loss. Brian now makes a dedicated effort to ensure his legacy – and the legacies of all who sacrificed – are never forgotten.

One thought on “A family changed forever: Honoring a brother killed in Vietnam”