The Wall That Heals has successful first stop of 2019

The Wall That Heals made its first stop of 2019 in San Antonio, Texas. The mobile exhibit rolled into town on Tuesday, February 26 and spent four days honoring and remembering veterans. The visit concluded on Sunday, March 3. Patriot Guard riders and local police led a grand escort into Fort Sam Houston National Cemetery at the start of the week as members of the public stood on sidewalks with flags and cheered.

A group of riders join together for a group shot after The Wall That Heals was escorted into San Antonio, Texas.

A Vietnam veteran who escorted The Wall That Heals said, “The Wall is meaningful to me because I know and knew a lot of the guys whose names are on The Wall.” He goes on to talk about how important it is that the exhibit now honors those who died from exposure to Agent Orange. He tells us he has two cousins who served. One returned home and lived with his injuries for the rest of his life and the other died from exposure to Agent Orange. He said that it’s meaningful to know that they were both appreciated. With a traveling memorial honoring the men and women who served, it seems to have reinforced that appreciation.

On Wednesday, The Wall replica was set up with the help of Fort Sam Houston’s 312 MI Battalion. Once completed, The Wall was open to visitors. It was officially welcomed to the community with an opening ceremony on Thursday, February 28. The community came out, despite of the blistery weather and scattered showers, and the exhibit began its 24-hour viewing.

Visitors find names while The Wall That Heals is in San Antonio, Texas.

One of the groups in attendance was a large group of Edgewood veterans. The Edgewood school district was said to have had the highest number of casualties in the San Antonio area with more than 50 names on The Wall. Biographies and stories of courage were provided to honor some of these local heroes on the Edgewood School District website. Many of the veterans were able to find their friends’ names on the memorial.

Some beautiful occurrences also took place during the visit. Unbelievable coincidences, also known as “Wall Magic,” were on full display in San Antonio. Wall Magic describes twists of fate and “magical moments” that bring long-awaited healing when people visit The Wall in Washington, D.C. or The Wall on the road.

Frank Trevino visited The Wall That Heals while it was in town. He described one of those extraordinary moments on Thursday.

“Two veterans who served side by side in Vietnam walked by each other at The Wall That Heals, locked eyes, and recognized one another immediately,” Frank recalled. “It had been 1968 since they had last seen each other.

Frank snapped a photo of the two veterans embracing more than 50 years later. 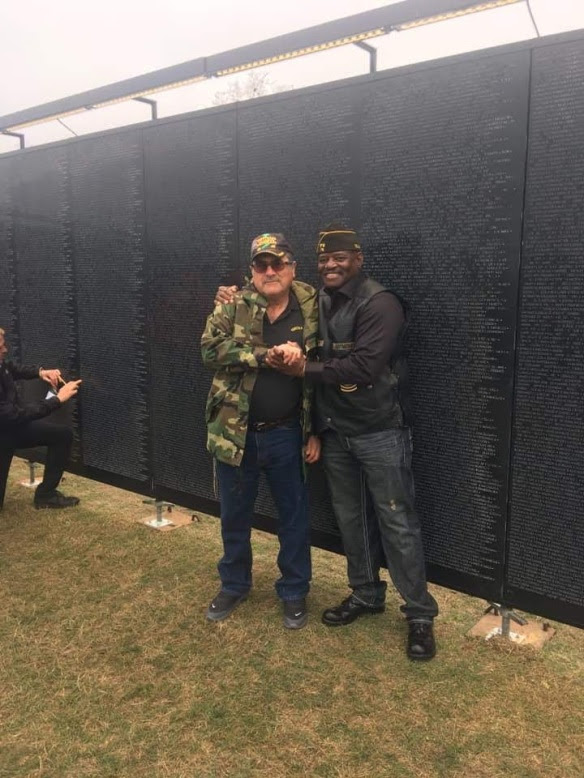 Two veterans shake hands after seeing each other more than 50 years later while The Wall That Heals was in San Antonio, Texas. (Photo credit: Frank Trevino)

Other special visitors and groups came out to pay their respects. The Laredo Vietnam Veterans Coalition traveled “45 strong on a two and a half hour trip to see The Wall That Heals and say hello to 16 friends lost in Vietnam,” Frank said to VVMF. Frank believed this to be a magical moment as well.

On Friday, The Wall That Heals wrapped up school visits with NJROTC students from Harlendale High School. VVMF provides free educational tours that give an overview of the Vietnam era, the items left at The Wall, and The Wall replica itself. Students get a chance to learn the history of the memorial, the design, and the people whose names are inscribed upon it. 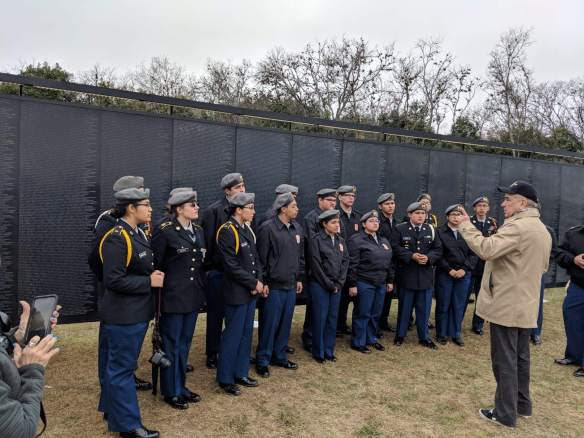 VVMF unveiled an all-new The Wall That Heals mobile exhibit in 2018. The Wall That Heals became a three-quarter scale replica of The Wall in Washington, D.C., larger than VVMF’s previous walls. Currently, it is 375 feet in length and stands 7.5 feet high at its tallest point. Like the original Memorial, The Wall That Heals is erected in a chevron-shape and visitors can do name rubbings of individual service member’s names on The Wall.

This year, the mobile exhibit underwent more changes. These changes were primarily focused on the mobile Education Center to give a more prominent view of the In Memory program and those honored through it. In Memory gives recognition to Vietnam veterans who passed away from illnesses and diseases related to their service.

The mobile Education tells the story of the Vietnam War, The Wall and the divisive era in American history. Digital screens are part of the mobile Education Center and now one screen is solely dedicated to photos of In Memory honorees from the state where the mobile exhibit is on display. 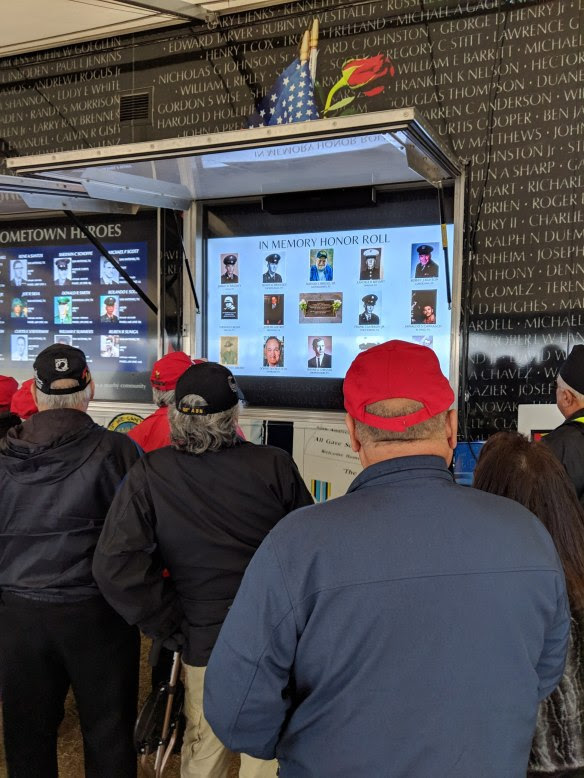 Visitors look at the In Memory screens as part of the mobile Education Center while The Wall That Heals is in San Antonio, Texas.

A replica of the In Memory plaque is the newest addition to The Wall That Heals. On November 10, 2004, a plaque was dedicated at the northeast corner of the Three Servicemen Statue plaza in Washington, D.C., with a ceremony sponsored by the Vietnam Veterans of America. The plaque is a carved piece of black granite measuring 24 inches by 36 inches. The inscription reads “In memory of the men and women who served in the Vietnam War and later died as a result of their service. We honor and remember their sacrifice.”

Now, the replica of the plaque will travel the country. 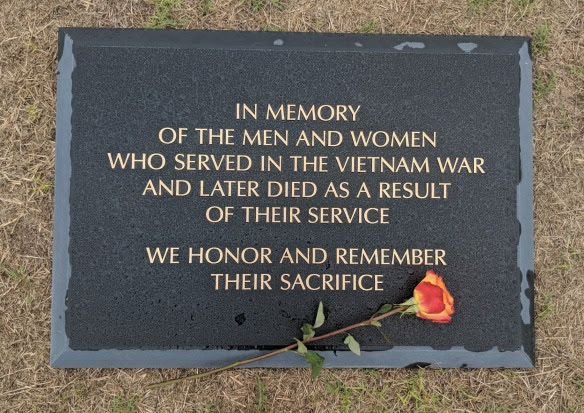 The In Memory plaque replica that travels the country with The Wall That Heals mobile exhibit.

The In Memory plaque replica saw its first visitors in San Antonio as well as its first tribute. A rose was left in memory of those who brought sacrifices home from the war.

After The Wall That Heals stop concluded, 7,500 people were in attendance throughout the four days the exhibit was on display. Debbie Delgado, who worked closely with The Wall replica during its first stop, said 903 Vietnam pins were presented to Vietnam veterans. “They just braved the wind and the cold and came out anyway to see their buddies names on the Wall,” she added. “We laughed and cried with the veterans and listened to so many heartfelt stories of war.” There were seven schools, four retirement centers, one coach bus from Laredo, Texas with 50 veterans, and many who came from the surrounding towns.” All she could add was, “What an experience.”

We couldn’t be happier to have had such a successful first stop of the 2019 tour.

To see if we are coming to a community near you, view 2019 The Wall That Heals tour dates here: vvmf.org/2019-twth-tour