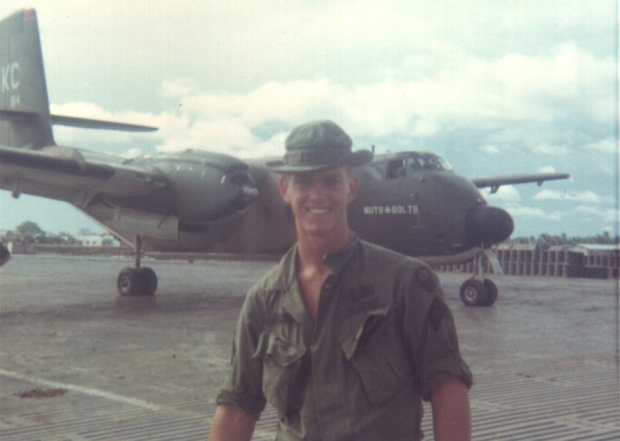 Charles Elder in Tan An in the Long An Province of Vietnam, 1969.

“Buddy, you got a million dollar wound!”

The voice drifted down through a thick hazy fog of anesthesia, but as I clawed towards consciousness I remembered thinking I’d never heard more promising words.  Less than a month in Vietnam, and I was going home.  Alive.  I strained to open my eyes and focus, but couldn’t.

“A million dollar wound,” the orderly said.  “You got all your parts and pieces, and I’m taking you to Ward 7.  Everyone in Ward 7 goes to Japan for a while and then back to the real world.”

The gurney glided down the brightly lit corridor and swerved through the double doors of Ward 7.  Tears welled in my eyes.  Four hours earlier, at dusk on November 25, 1968, I was placed on a UH1-H medevac helicopter just outside of Tan An after a chunk of Chinese grenade slugged into my abdomen.  Bleeding profusely, I was in deep shock, so the chopper pilot made a beeline for the 3rd Field Hospital in Saigon.  It was the biggest hospital in Vietnam, the only one in which the nurses wore white uniforms instead of combat fatigues.  I vaguely remember being staged in the triage area with bodies in various stages of moaning life and grisly death.

As the orderly swung into the ward, I looked around groggily. I was still trying to shake off the effects of the anesthesia and deal with excruciating pain while trying to take in the pathetic landscape of an intensive care unit in a combat zone.  Bodies in all manner of bandage and contortion drifted into view through the chiaroscuro of the dimly lit ward.  Groans and cries floated up from mangled young men in a heart-wrenching chorus.

That night, I came to believe in angels.  As the anesthesia wore off and the reality of my situation dawned on me, I did what any twenty year old boy would do – I cried.  As I lay in the darkened ward, tears of pain and self-pity and homesickness rolled down my cheeks.  Suddenly, I heard a voice gently ask, “Would you like something for your pain?” I looked up and saw my angel, a young nurse with a hypodermic in her hand. I was so overwhelmed I couldn’t speak, so I simply nodded.  A moment later I felt the pinprick of the needle, and then welcome oblivion.

Three days later, orderlies made the rounds in the ward handing out fancy menus for Thanksgiving dinner. Roast turkey, dressing, gravy, sweet potatoes, mashed potatoes, cranberry sauce, dinner rolls, olives, and pumpkin pie.  Three weeks of subsisting mostly on C-rations made this the stuff of dreams!  But my hopes were dashed when the Army doctor, on his daily rounds later that morning, curtly advised the nurse that I was to stick to my liquid diet for several more days.

And so it came to pass that my Thanksgiving dinner that year was a bowl of green Jell-O and a carton of milk.  When the meal cart arrived, I was nearly blind with envy, watching the trays of turkey dinners being distributed and inhaling the wonderful aroma wafting through the ward.  I thought longingly of memories of Thanksgivings past, and scowled at the kindly Vietnamese lady who set my tray with Jell-O and milk in front of me.  Being wounded was bad enough, but not having a traditional turkey dinner on Thanksgiving was almost more than I could bear.  Unexpectedly, I began to cry as I lifted the first rubbery spoonful to my mouth.  It was the most untraditional Thanksgiving I would ever have.

I endured another week (and a terrifying Viet Cong mortar attack) at the 36th Evacuation Hospital in Vung Tau, and two more weeks at the 6th Convalescent Center in Cam Ranh Bay.  As it turns out, I should have gone to Japan and stateside as advertised.  But, with Tet just around the corner in January, the Army was trying to patch up everyone it could and get them back out into the field.  It wasn’t the first or last time in my military service that my timing wasn’t very good.

Charles Elder and his squad mate Donnie Parker in the rice paddies of the Long An Province of Vietnam, December 1968. (Photo credit: Charles Elder)

On December 23, I received orders to rejoin my unit.  I was doubly upset, because it meant that, in addition to going back into a combat zone, I would miss Bob Hope, who was going to do his Christmas show at Cam Ranh Bay that year.  At dusk on Christmas Eve, I stepped off a supply chopper near Binh Phouc, to a warm, if surprised, welcome from my buddies.  My first sergeant told me he’d never seen anyone in such deep shock survive.  We went on an ambush patrol that night, resuming the surreal pattern of the 364 days I was to spend in the Mekong delta.

It took a long time for me to really understand the significance of that faraway Thanksgiving Day, and of that year.  Each year, when we say grace before the Thanksgiving dinner we traditionally host for family, neighbors and friends, I silently count the many blessings in my life: my wife Susan and daughters Rebecca and Bonnie, a loving and supportive extended family, a comfortable home, a rewarding career, good friends and excellent health.  And each year, instead of my usual slice of pumpkin, pecan or mincemeat pie after dinner, I just have a bowl of green Jell-O with my wife, Susan, and count my blessings again.