‘In Memory’: A day to honor Vietnam veterans who returned home and later died

On a sweltering day in Washington, D.C., thousands of loved ones joined together on the East Knoll of the Vietnam Veterans Memorial. June 16 was a day set aside to honor Vietnam veterans who passed away as a result of their service. 345 new honorees were being inducted into the In Memory Honor Roll, and loved ones would read their names aloud on the National Mall as part of the In Memory ceremony.

The In Memory program began as a way to honor Vietnam veterans who served in Vietnam, returned home, and later passed away from illnesses related to their service. Many of their illnesses were due to exposure to Agent Orange or PTSD. These veterans are not eligible for inscription on The Wall under Department of Defense guidelines, but a ceremony is held annually to honor the sacrifices of these heroes.

The In Memory Day Ceremony was a day of support and healing for many who attended. Some said this was the first time their loved one had been recognized for the physical and emotional wounds they carried. Others talked about how important it was to be in the presence of those who shared the same experiences. The attendees, who came from all walks of life, wanted their veteran to be remembered.

“It meant so much to me to honor my dad, especially since he wasn’t honored properly in life,” Lauren Lee said of her father Larry Steven Miles.

Larry enlisted in the U.S. Marine Corps and served in Vietnam from 1969 to 1970 as a radioman with the 1st Marine Division. He retired as a Corporal and when he returned home, he was already suffering. “The war affected me from the moment I was born,” Lauren said.

Sadly, Larry passed away on December 31, 2017 from illnesses related to Agent Orange exposure and PTSD.

While she was planning her father’s funeral, Lauren learned about the In Memory program. She said that it not only helped her process his death, but the emotions she had experienced throughout her life. The same weekend she took part in the In Memory Day Ceremony, her father was interred at Arlington National Cemetery. Lauren was able to spend the entire weekend honoring his service and acknowledging her grief. “Both events brought a lot of closure to me regarding his life and death,” she added. “It was meaningful because I couldn’t help him when he was alive, but I could do this for him.” 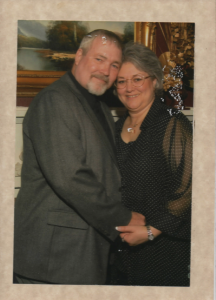 For other attendees, Vietnam affected more than a single veteran. Nancy Gossett came to Washington, D.C. to honor not only her husband, John Gossett Sr., but also her father, Henry James Jr. Even though her husband served in the U.S. Marine Corps as a Corporal and her father served in the U.S. Air Force as a Lieutenant Colonel, they shared some similarities. The two men served from 1966 to 1967. She loved them dearly and they loved her. Nancy says they were the only ones who understood each other when it came to talking about Vietnam and “they had a bond that no one else had.”

Tragically, the effects of Vietnam would linger in both of them and reveal itself in hard-fought illnesses.

John was diagnosed with Laryngeal cancer from Agent Orange exposure in 2003. He underwent radiation and chemotherapy before finally having surgery to remove his larynx. He learned to speak with the use of a prosthesis and fought a long battle of medical problems as a result of his cancer.

Henry, who served proudly as a pilot in WWII, Korea and Vietnam, would succumb to Parkinson’s disease and related health issues. 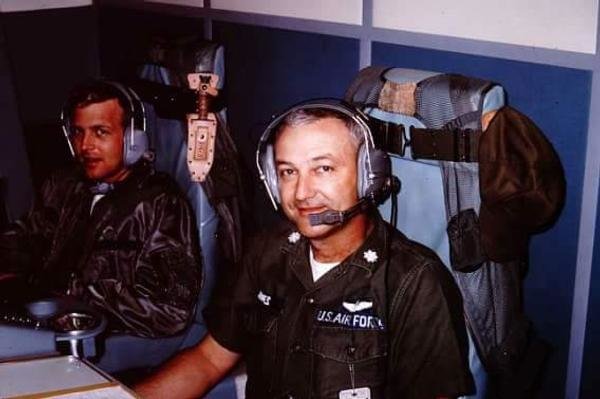 Nancy said that In Memory Day gave her and hundreds of others the opportunity to let the “world know how much we miss the ones who died and why they died.” Her sister joined her during the weekend, offering support and making the ceremony even more special. Nancy hopes that her dad and husband will be remembered “as loyal patriots who served out of love and duty for their country.” While she says that they were not the most highly decorated service members during the war, they were some of the best America had and they are her heroes.

For Vickie Waitman, the In Memory Ceremony fell on a day she thought she would never spend alone. When she reached the podium to read her husband’s name,  Joseph Leo Waitman, she told the crowd that the day would have been their 50th wedding anniversary. She described him as a wonderful husband, a great father, and grandfather to a little boy he never got to meet.

“Honoring my husband at the In Memory Ceremony was not what I expected to be doing on my 50th wedding anniversary,” Vickie said. “But at least we were together in a way I never would have imagined.” 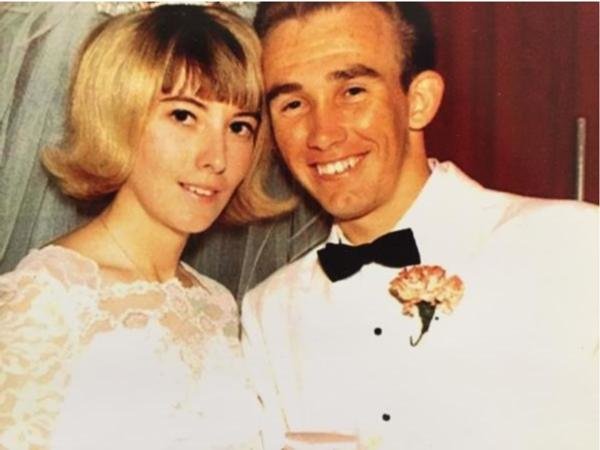 Vickie Waitman and Joseph Waitman on their wedding day.

Joe was born on December 1, 1947 in Las Vegas, Nevada. He joined the U.S. Army after graduating from high school in 1966.  Vickie and Joe were together since they were 13 years old. They were married on June 16, 1968, one month before he left for Vietnam.

“Although he was never the same, I was happy that he came home in ‘one piece,’” she recalls.

When Joe passed away on May 18, 2009 from kidney failure and heart disease related to his Agent Orange exposure, it was one month before their 41st wedding anniversary.

The tribute of Joseph Leo Waitman with a bottle of champagne next to him.

On their 50th anniversary, Vickie spent the day in Washington, D.C. touring the city and monuments. She carried her husband’s tribute with her. People often asked her about it, and she was able to tell them their story.  When she returned to her hotel that evening, she ate in her room and set his picture across from her. She toasted to the both of them with Korbel Champagne, what they drank on their wedding night.

“As I reflected on the day, I felt he had been with me all day,” she said.

Vickie says that her husband saw it as his duty to serve. He was in college at the time, but quit school to volunteer for Vietnam. She said that there were times that he came to believe that he shouldn’t be fighting there, but “he was proud to have gone anyway.” On February 18, 2011 their grandson was born. Vickie  insists that even “though he will never touch his grandfather,” he often asks about him. And she knows Joe would have be proud.

The Vietnam War continues to claim the lives of its veterans. We see the perennial effects in the wives, children and families left behind. For many, In Memory Day is about honoring their service, acknowledging their sacrifice and reminding the world that they are loved. It is a day to say, “thank you for your service and welcome home.”

To learn more about the In Memory program and to find out how to honor a Vietnam veteran, click here.

← 5 items left at The Wall by mothers of the fallen tell stories of love
They devote their time to honor the fallen, their “aunts and uncles” on The Wall →