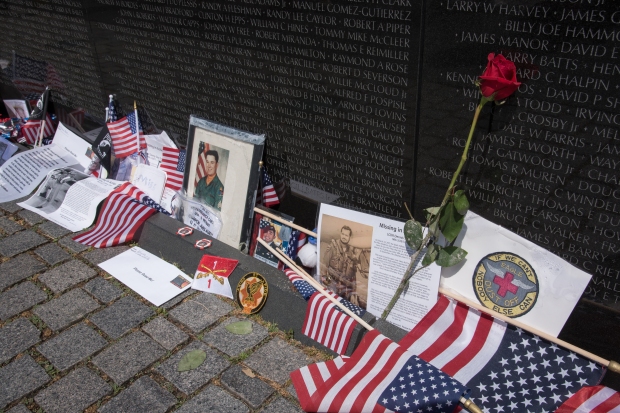 Items left at The Wall on Memorial Day 2017.

A Gold Star Mother is a woman who lost a son or daughter serving in the United States armed forces. Their loss and heartbreak have emerged in the items they have left at The Wall in Washington, D.C. and memories they have chosen to share with those around them.

Here are five items that have been left at the Vietnam Veterans Memorial that speak of a mother’s love. 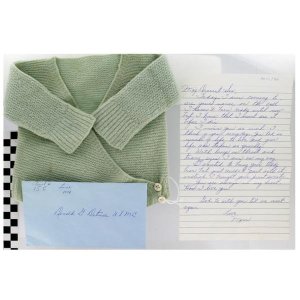 Baby sweater and a handwritten letter were left at The Wall for U.S. Marine Corps PFC Donald Gary Detmer on October 1, 1990.

His mother addresses the letter to, “My Dearest Son” and signs it, “Love, Mom.”

The letter describes his mother’s first visit to The Wall to view her son’s name, an act for which she had previously been unprepared for, but an act she knew she must do so before her own death. In the letter, she informs him that she intended to bring his teddy bear with her to leave at The Wall but, being unable to part with it, has brought his first sweater instead. The letter closes with the lines, “You are always in my heart. How I love you. God be with you til [sic] we meet again.” 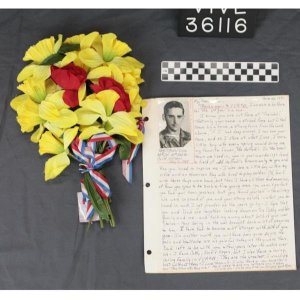 A black and white photo and faux flower bouquet were left at The Wall for U.S. Army SSG Clifford William Silvia on June 22, 1991.

The letter is addressed, “My Precious Son” and is signed, “As I used to end my letters to you in Nam . I love you – I miss you & say your prayers. Love Mom.”

The letter recalls how Silvia used to pick bouquets of wild daffodils for his mother as a child. An excerpt from the letter reads, “I hope that you and Dad are together looking down on Sis Cathy and her family and me […] I have had to become a lot stronger with both of you gone – In another month you will have been gone 24yrs, the pain and heartache are as painful today as they were than [sic].” 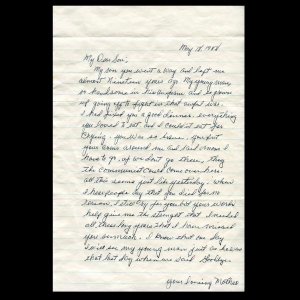 This letter was left at The Wall on May 18, 1988. The envelope had the names of U.S. Army SP4 Robert Earl Worrell and U.S. Army Specialist 4 SP4 Leslie Fred Shenk inscribed upon it.

The letter is addressed, “My Dear Son” and is signed, “Your loving Mother.” It is dated May 18, 1988 and opens with the line, “My son, you went away and left me almost nineteen years ago.”

In content, she recalls her last day with her son and records his justification for serving in Vietnam with his words, “…Mom I have to go, if we don’t go there, they the communist [sic] could come over here.”

She also writes, “When I hear people say that you died for no reason, I still cry for you but your words help give me the strenght [sic] that I needed all these long years that I have missed you so much.” 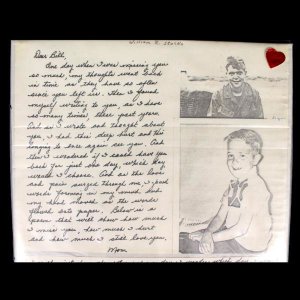 A handwritten note and poem were left at The Wall for U.S. Army SGT William Reed Stocks  between November 1984 – February 1985.

The handwritten note is from SGT Stocks’ mother Eleanor Wimbish and is addressed, “Dear Bill.”

“Below is a poem that will show how much I miss you, how much I hurt and how much I still love you.”

Ms. Wimbish begins the handwritten poem by reminiscing about important days in SGT Stocks life and speculating as to which day she would choose to spend with him if she could live life over again. She recalls the heartbreak and grief of his passing and notes that she would not choose any of the days associated with his military service or the notification of his death to experience a second time, and concludes her poem with the lines, “So never again will my arms hold you tight for you’ve gone to your home in the sky. So until God calls me to be with you there, in my heart you’ll be ever alive!”

The handwritten note is accompanied by two photos depicting Stocks as a 21-year-old serviceman in Vietnam and as a 9-year-old child. 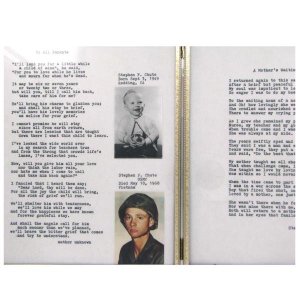 The first poem is entitled, “To All Parents” and is by an unknown author. It is in the voice of the Almighty offering the gift of a child to a new parent, imploring that the parent care for and love the child, and requesting that the parent willingly submit to God’s judgment when the child’s life is ended prematurely.

The second poem is entitled, “A Mother’s Waiting Arms” by Chute’s mother. It is taken from the perspective of a child brought into this life and raised by a loving mother. The narrator of this poem describes this loving mother/son relationship, his own growth into a man, his compulsory military service and death in an overseas war, and concludes with the expressed hope that his spirit will one day return to this life and into the waiting arms of another loving mother.

One photo is of Chute as a toddler and another is of him in military attire.

To see more items left at The Wall, visit vvmf.org/items.