The Army photographer behind the harrowing images of ‘Marines and Tet’

John Olson was 19 years old when he set foot in Vietnam as a U.S. Army combat photographer for Stars and Stripes. Over the course of his time in-country, Olson covered the Tet Offensive in 1968. It was there that he captured some of the most harrowing images of the Vietnam War.

Olson would spend his 20th and 21st birthdays in Vietnam. He served in the military in 1967 and 1968 and was there as a civilian afterward. The young man who set foot in Southeast Asia has always been motivated about what he wanted to do with his life. He had wanted to be a world-class photojournalist and a war photographer since he was 12 years old.

The Tet Offensive began in the early morning of January 30, 1968. The campaign was launched on the Tet New Year holiday and consisted of surprise attacks against over 100 military and civilian control centers in South Vietnam, against South Vietnam and U.S. armies. 84,000 North Vietnamese attacked 36 provincial capitals. They were told to “crack the sky and shake the earth.” The next day, January 31, would be the bloodiest day of the entire Vietnam War with 246 American casualties.

Olson was in Saigon the first day of Tet. As a photographer, he knew the more intense the fighting the better the images.

A month later, the Battle of Hue would transpire and become one of the longest and bloodiest battles of the entire Vietnam War. The city of Hue was not well fortified or protected from an enemy attack. “From the onset, it became evident that the fighting in Hue was the most severe it had ever been,” Olson recalls. “So I went to Hue.”

Olson would spend three days with the 1st Battalion, 5th (1/5) Marines. Some of his photographs were part of an exhibit at the Newseum called, “The Marines and Tet: The Battle That Changed the Vietnam War.” The exhibit opened on January 26, 2018 and closed on July 8, 2018.

The exhibit featured 20 large-format photographs and 10 tactile versions of those photographs with touch-activated sensors that provide audio interviews, according to the Newseum website. It included Nikon cameras that Olson used in Vietnam and other personal items. Ten Marines were also interviewed for the exhibit.

“The fighting was so severe – so new for these Marines because, as many of them have told me that I’ve located and since interviewed, they were jungle Marines, they were accustomed to fighting in the jungle and the house-to-house fighting was new to them,” he said.

“They initially were told that they were going into Hue to mop up a couple hundred enemy and when they got there they were met my 10,000 heavily dug-in and heavily armed North Vietnamese and Viet Cong. And in the beginning, it was a bloodbath,” he added.

Olson’s photos would be published in Stars and Stripes and Life magazine. He later won the Robert Capa Gold Medal for his work.

His image of a tank carrying wounded Marines at the Battle of Hue became one of the most iconic images of the Vietnam War. Ironically, the photo did not stand out to Olson at the time.

He has since experienced a phenomenon called “missing time.” The events that he and others saw, participated in, and did to survive were so horrific they blocked a lot of it. Whenever Olson is asked, “What do you think about that photograph?” there’s a lot that doesn’t resonate with him. 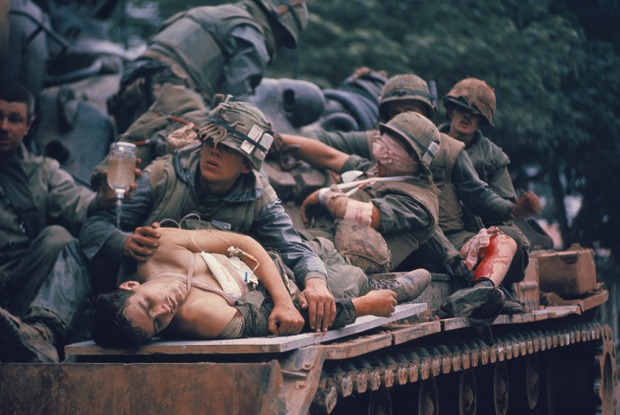 John Olson’s photograph of injured Marines being evacuated on a tank is one of the most iconic images from the Vietnam War. (Photo Credit: John Olson)

However, there are moments that stick out vividly in his memory. He would describe February 16, 1968 as a horrific day. Olson shared the following memory.

“We were pinned down in our house. We had a bunch of dead and wounded to take care of. And we had a radio that would receive and not transmit. And we got rescued by a fire team and accompanied by a priest. The priest was handing out last rites like ‘Tic Tacs’ and he was later, in the next 24 hours, captured and executed.” 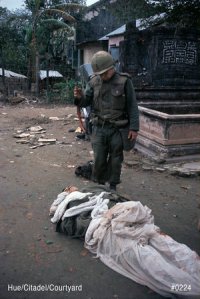 That priest was U.S. Army Chaplain Aloysius McGonigal. Olson has a photograph of him giving last rites to a dead Marine. This photograph and others can be seen on his website, “Tet 1968.”

Olson hopes to reach more men who served in Tet and interview them to create a repository of stories that will be available online. He also has a new goal. He’s looking for the unidentified men in his photographs. The public can view his “Missing Men” gallery and help him locate the Marines.

It’s up to Olson to filter through the photos and stories from what is accurate and what isn’t.

“My goal is to put the story out there and let the public digest it,” he added.

Olson sees his work as a “truthful, raw look at what these young men went through during the Tet Offensive,” and three days of hell. He knows that it’s hard for any civilian, anyone who has not been in combat, to have any idea of what it’s like. He believes these interviews will give the public a sense of that.

← They Served Together: Brother honored after losing battle to Agent Orange-related cancer
‘Proud to call him dad’: Son to honor father who lost battle with PTSD →