Soldier sends poem to his mom months before his death: ‘My heart is home with you’

They say there is nothing like a mother’s love.

The saying was true for U.S. Army PFC Larry G. Manuel, who served with the 4th Infantry Division in Vietnam. He made the ultimate sacrifice in the Kontum Province on March 30, 1968. Larry was 18 years old.

Prior to his death, Larry wrote a poem entitled “My Coming Home.” He mailed it to his mother, Bernice, dated January 26, 1968. 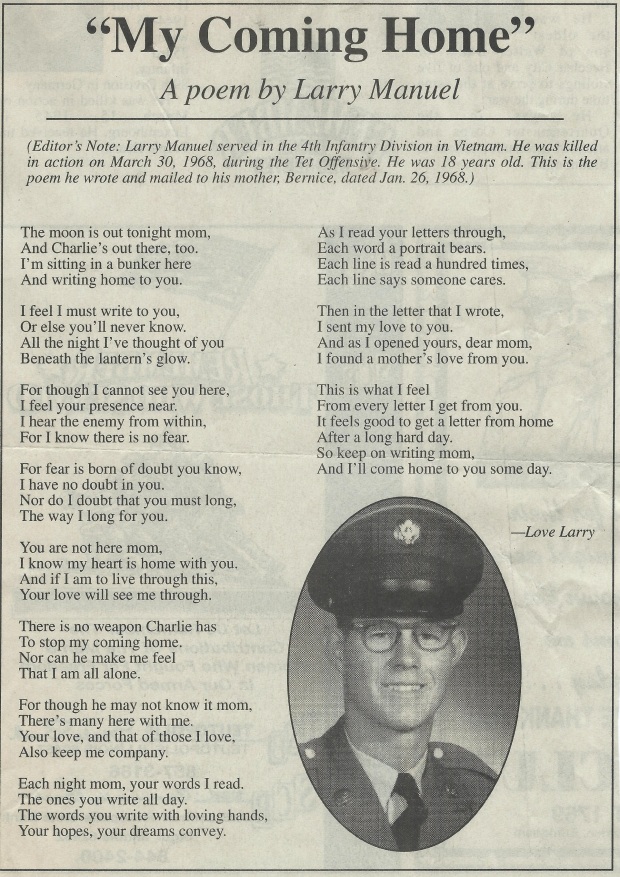 On Larry’s Wall of Faces page, you see his life in photos. The photos were submitted by Sybil Noss, a Wall of Faces volunteer, and Larry’s brother, Lester. When you look through the photos, you feel like you’re watching the young soldier grow up.

And while he is no longer with us, his poem shows us that the love for his mother never died. Her letters and loving words were comfort to him in a dark, unfamiliar place. He was a hero in his own right, but a son first.

Larry Manuel is remembered on Panel 47E, Line 13 of the Vietnam Veterans Memorial in Washington, D.C.

4 thoughts on “Soldier sends poem to his mom months before his death: ‘My heart is home with you’”