Steve Conto is from Menasha, Wisconsin. While not a Vietnam veteran, he has the utmost respect for those who served before him. 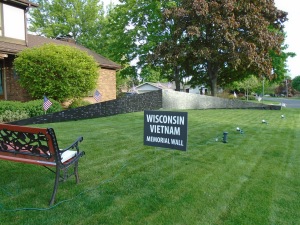 Wall replica on the lawn of Steve Conto from Wisconsin.

More than a decade separates Steve’s service from the brutalities of the Vietnam War. However, that didn’t stop him from recognizing the loss of American heroes who served so courageously before him.

“As a Gulf war veteran, I understood minutely what they had gone through,” he said.

Steve has the idea to build a replica of the Vietnam Veterans Memorial (The Wall) in 2013. The process of building one to mimic the original in Washington, D.C. took almost four months.

1,249 names are listed upon Steve’s memorial. The names are service members from Wisconsin who died in the war and those who share a connection with the state in some capacity. His memorial is 64 feet in length. Instead of black granite for the panels, they are made of plywood. The names are not inscribed, but instead on black lapel tape with white lettering. Each of the panels are numbered within close proximity to the line each name is one, distinguishing the order in which they died. And an asterisk  is placed next to the names of those listed as missing in action (MIA) or prisoner of war (POW).

The message of Steve’s replica is clear. He wants a community to know that those who died were our country’s boys and that they “shouldn’t be forgotten.” 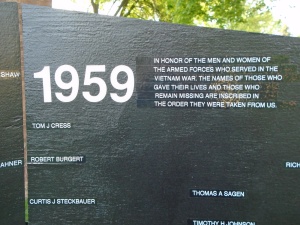 The beginning of Steve’s Wall replica. It begins with 1959 on the first panel, and holds the same words that are inscribed on The Wall in Washington, D.C.

Today, the completed replica stands proudly on his lawn. A sign is staked into the ground and reads: WISCONSIN VIETNAM MEMORIAL WALL. In his words, This Wall is dedicated to all of the following:

To all the mothers and fathers who lost a son

To all the brothers and sisters who lost a brother

To the Aunts and Uncles who lost a nephew

For a sister Jay from a farm near Marytown, who lost her brother Robert

For Brothers Dave and Allen from Wilson, who lost their brother Tom

For my neighbor friend Don who lost classmates from Green Bay 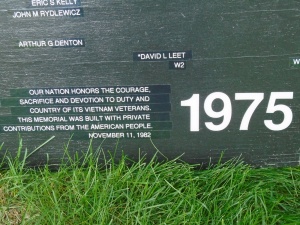 The end of Steve’s Wall replica with the same words as those inscribed on the last panel of The Wall in Washington, D.C.

For my good friend Mike who lost classmates from Janesville

For Peggy from New Holstein who lost her dad Bill

For Arty who lost her brother Paul

For the families of the 31 MIAs on this wall

For each community and county of our state

For the shipmates and comrades they left behind

For friends and family

For all who come to remember”

As a completed memorial, you can see it on Steve’s front yard two weeks throughout the year – leading up to Memorial Day and the week of Veterans Day. 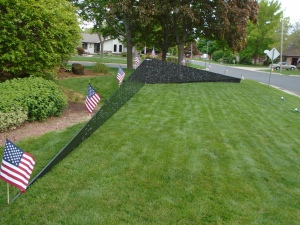 Steve Conto’s Wall replica with flags carefully places beside it.

This year, Steve had close to 100 people visit his replica surrounding Memorial Day. Many were overwhelmed and amazed by its construction.  While very emotional, those who saw it were “very grateful” they did.

It is a place for “people to come and talk about who they were and their memories.”

Steve also admits that involving himself in this project has been the most meaningful experience in his life. He owes his direction to the veterans’ comrades,  friends,  families, and their stories of heartbreak. All of it are beyond words. 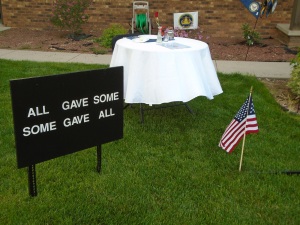 Aside from creating a replica of The Wall, Steve has also been devoted to a project called The Final Bridge he began in the spring of 2002. He calls it a personal legacy project. The goal is to”bridge” a connection between the names on The Wall and their final resting places. For more than a decade, he has recorded the burial sites of the Vietnam fallen from Wisconsin. He does this so comrades and loved ones can find them.  Since he began, he has compiled a list of his findings, with names of each service member and the towns they enlisted from. Steve has successfully visited 691 sites to date.

In addition to visiting their burial sites, he cleans up and places flags around each area. He has gone through the Virtual Wall and posted the burial location and details for each.

“I will not rest till they are all found and visited,” he has said.

Through both endeavors,  Steve wants to make sure communities are aware of these heroes. He just wants to give proper tribute.