With the fall of Saigon imminent, U.S. policy involved removing “at risk” Vietnamese who had supported efforts to stop the Communist takeover of South Vietnam. More than 7,800 people were successfully evacuated in 81 American helicopters. 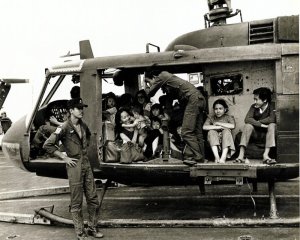 Nearly 6,000 Vietnamese refugees escaped from Saigon as the North Vietnamese attacked the outskirts of the city. For nearly 30 hours, American military helicopters flew refugees to aircraft carriers offshore. Helicopters that were built for 10 people were taking five times as many.

Agitated and confused men, women and children held onto what few possessions they could carry in their arms, until they were set for take off.

The USS Midway Museum took part in Operation Frequent Wind, rescuing about 3,000 refugees on its flight deck. The Midway honored the 40th anniversary of Operation Frequent Wind on Sunday, April 26, 2015 with a mid-day flight deck ceremony and day-long celebration.  This is a part of the The USS Midway hosting The Wall That Heals through May 1st. The festivities featured sailors and officers who were aboard on April 30, 1975 and other Navy ships including USS Midway Captain Larry Chambers and Midway Air Boss Vern Jumper. The Wall That Heals includes a half-scale replica of The Wall, which holds the names of the more than 58,000 Vietnam fallen. This five-day event brought together individuals, building community, and recognizing the affluent Vietnamese population in San Diego.

Capt. Chambers commanded the USS Midway during Operation Frequent Wind. Chambers was vital in rescuing thousands before the Fall of Saigon, 1975. In one particularly heroic story, Chambers was responsible for the safe landing of South Vietnamese Air Force Major Buang Ly, who took off from Saigon in a Cessna ‘Bird Dog’ with his wife and five children.

Flying from Con Son Island in South Vietnam to safety during the evacuation operation, he was under heavy fire and dangerously low on fuel, until Major Ly found the American aircraft carrier USS Midway. He circled the air space over the ship as he dropped notes on board asking for help. Ly stuck a note in his pistol and dropped in onto the flight deck. Chambers ordered his crew to push several VNAF US-1 Huey helicopters into the water to ensure that Ly, and his family, could land safely.

An estimated US $10 million worth of UH-1 Huey helicopters were pushed overboard.

“When a man has the courage to put his family in a plane and make a daring escape like that, you have to have the heart to let him in,” Chambers said, explaining his decision to allow Ly to land on the deck.

[Ly] and his wife had an emotional reunion with Chambers during a commemoration with The Wall That Heals on April 26.

Major Buang’s O-1 after landing aboard Midway during Operation Frequent Wind. Also, two of the deck crews are seen clapping their hands in joy.

“There was a lot of heartache all over the place,” Jumper has said. “But we were able to save these thousands. We were fortunate enough to save them.”

The operation followed Operation Babylift, which took place earlier that month and was the mass evacuation of South Vietnamese children to the U.S.

After the chaos, uncertainty, and the unfortunate circumstance of many being left behind, it ended on April 30th.

At 7:53 a.m. on April 30th, the last helicopter lifted off the embassy roof and headed out to sea. U.S . forces had flown more than 1,000 aircrafts over Saigon this final day, rescuing thousands. Only a few hours later, North Vietnamese tanks crashed the gates of the Presidential Palace – the war was over.

More than 100,000 refugees would later turn into millions. Today, there is a population of more than 100,000 Vietnamese that occupy “Little Saigon” in California. Families made their way to the U.S., started lives for themselves, and prospered. During those final tragic days of the Vietnam War, a nation continues to honor the heroism displayed during Operation Frequent Wind, and celebrates how far the community has come. Children of refugees are now doctors, lawyers, and have made names for themselves.

VVMF honors all who served and commemorates 40 years since the end of the Vietnam War.