Georgia veteran to be remembered, added to The Wall

Each spring, VVMF works with the Department of Defense (DOD) to ensure that The Wall is accurate. When MIAs are recovered in Vietnam or when an appeal has been approved for addition to The Wall, VVMF makes the appropriate changes.

The week of Mother’s Day, seven new names will take their rightful place among their fallen brothers and sisters. The Vietnam Veterans Memorial Fund will honor seven new names and five status changes that will be added to The Wall on Sunday, May 10, 2015 at 10:00 a.m. Each year, new names are added to The Wall to fix clerical errors and mistakes, and to honor those veterans who died as a direct result of their wounds sustained while in Vietnam.

Michael Paul Knight is one of the names that will be added to The Wall. 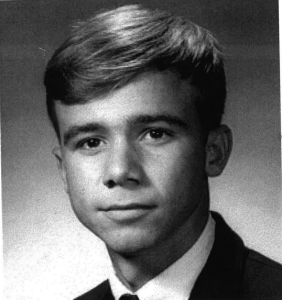 Born on February 28, 1944 to Doris Wilson Knight and Paul Weathers Knight, Michael Paul Knight spent his early years in the small southwest Georgia town of Thomasville. Knight enjoyed a carefree childhood along with older brother Bill and younger sister Gail, graduating from Thomasville High School in 1962 having been voted “Cutest” in his class.

After a year attending North Georgia College, a military college in Dahlonega, Georgia, Knight transferred to Auburn University and was a proud War Eagle fan.  Due to financial problems, he dropped out a year later and volunteered for the U.S. Army in late 1964. He excelled his way through basic training and attended the Army’s Officer Candidate School in the Army Corps of Engineers in Fort Belvoir, Virginia. He was assigned as a Second lieutenant to Fort McNair and received his wings in 1968 from Army Flight School for fixed wing training. He received his orders to go to Vietnam in the spring of 1969, and served bravely. He died in November, 1969.

Knight was a man of character. 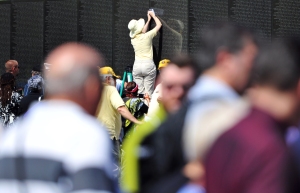 A volunteer makes a name rubbing at The Wall during the 2014 Name Additions on Mother’s Day Ceremony.

“He was personable and extremely popular without bending morals and character”, and had many close friends to show for it. He was a deep thinker with a quick wit who “hated hypocrisy and admired honesty” according to his wife, Becky Knight Roche.

These qualities were passed on to his daughter, Carolyn, who was born two months after his death. Through the stories of family and friends, Carolyn came to “know” her father, and lived a life he would have been very proud of. She even passed on his name to her oldest son.

Knight was proud of his service, and had planned to serve his career in the Army. He excelled in Basic Training, OCS, and flight training, and always maintained a sense of duty.

Becky continues to say, “Having his name added to The Wall is quite

an honor that Michael would be proud of-but may not have expected.  He was modest in that respect and never bragged about what he was doing.  His family is very pleased that his name is added because we know he served his country very well with loyalty and pride in service. Michael was special and I think just the number of family members and friends who care that his name will be added to the memorial speaks volumes about who he was.”

For  information on this year’s Name Additions on Mother’s Day Ceremony, click here.

To learn about someone whose name is on The Wall, visit VVMF’s online database.

One thought on “Georgia veteran to be remembered, added to The Wall”