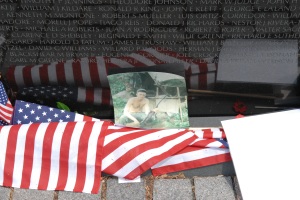 For years, volunteers across the country have worked with VVMF on the “Faces Never Forgotten” call for photos campaign. The effort aims to find a face for each of the 58,300 names inscribed on the Vietnam Veterans Memorial. As of today, VVMF has located photos for 38,300 of the names on the Vietnam Memorial. This means VVMF has only 20,000 photos remaining to put a face to every name on The Wall!

VVMF is delighted to congratulate the people of New Mexico, Wyoming, and North Dakota for finding the 398, 120, and 198 photos respectively of those who died or went missing in action in Vietnam from those states.

New Mexico was the first to complete the momentous task. The effort was led by the Vietnam Veterans of America, Northern New Mexico Chapter 996. Since the call for photos campaign was launched in October of 2009, about half a dozen volunteers, led by Team Leader Arturo Canales of Santa Fe, have worked tirelessly to get the job done. Last October, Canales submitted the final Mew Mexican photo of Bobby Joe Martinez of Fort Wingate. Martinez died in the Quang Tin province on May 11, 1968.

In late November, Wyoming joined New Mexico. The Wyoming effort was led by the Wyoming Veterans Memorial Museum in Casper, WY. They began in the spring of 2011 with the donation of a scrapbook by a group of Gold Star Mothers. From there, John Goss, Director of the museum and Iraq War veteran, and Vietnam veteran Franklin Weir set out to call families across the state and pound the pavement until every last photo had been found.

Roland Woolridge of Houston, TX became the most recent photo submitted to VVMF that brought the Faces Never Forgotten effort to 38,300!

“This project is doing wonders for many families,” Goss said. “They’re reconnecting and bringing up memories in a positive light. Many of them are still grieving. We think this helps.”

Over the summer, North Dakota became the third state to complete the task of finding photos for their state’s fallen heroes. The last photo to be submitted to VVMF’s Virtual Wall of Faces was Roland Ray of Houston, Texas, who fell in 1967. Ray’s photo has brought VVMF’s collection of photos to 38,300.

How can you get involved in the Faces Never Forgotten effort?

Every photo submitted to VVMF is a piece of history that will be shown in the future Education Center at The Wall. And every photo collected has to be evaluated and rated to specific exhibit guidelines.

Whether you’re a volunteer, staffer, or someone who merely submitted a photo, everyone had a part in this achievement.  A special congratulations to everyone involved. VVMF thanks you for your hard work and efforts in helping reach this important milestone. Please do not hesitate to be a part of this momentous effort! Learn more by visiting the VVMF wesbite.