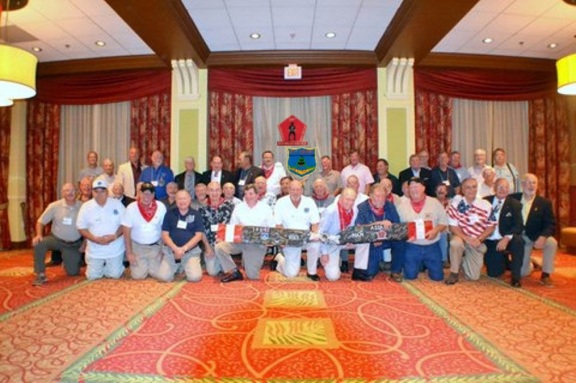 The gentlemen of 191st Assault Helicopter Company Association are hesitant to take credit for an enormous accomplishment; each man will say it was one of his buddies who really got the job done. But of course that’s the nature of a group like this, and that’s the nature of such a project.

The members of the 191st found at least one photograph for each of the 44 men who died in Vietnam while serving in the 191st AHC, effectively completing their part of VVMF’s Faces Never Forgotten call for photos campaign.

They began collecting photos just before Memorial Day. When they first visited the Virtual Wall, only four of the 44 photos had been uploaded. 191st member Ed McKee said a phone conversation with 191st President Harold Stitt kicked off the project.

“Harold and I have different recollections of that conversation,” McKee said, “but I distinctly remember that it was Harold who told me about how the 191st AHC Association needed to ‘get off our lazy butts and help the Vietnam Veterans Memorial Fund out on that project, because if we didn’t do this now, we probably never would.’”

Stitt remembers it differently. “Ed called me and asked what I thought and the following day I opened my email and was overwhelmed; he already had a running start,” Stitt said. “Ed McKee spends day and night doing these things; he was the total drive behind it.”

Clearly the project had a lot of support. And indeed such an undertaking needs a lot of enthusiasm. Stitt said within the organization there were 50 to 75 people reliably helping to find photos. These volunteers reached out to family members, visited hometowns and high schools. They often called high school principles to track down photos.

“I can’t say enough good things about the response that we received from the members of the 191st AHC Association who really got behind this project and spent countless hours combing through their attics and garages looking for pictures or running internet searches trying to locate the family, friends, or acquaintances of the men,” McKee said.

They also utilized their wide network of supporters through their Facebook page and email list. If they were unsure if they had the correct photo, they would post it to the Facebook page for verification. Stitt said all in all, hundreds of people helped in the effort.

“People just bent over backwards to help us locate a relative or someone else who may have had a picture of those men,” McKee said.

The last 20 percent of the project required 80 percent of the effort, McKee said. But, “whenever me and the rest of Harold’s ‘minions’ who were working on this project were getting ready to give up, because of Harold’s leadership and encouragement, we were persuaded to stay with it a little longer and invariably something would turn up that allowed us to keep moving forward,” McKee said.

Not only did the members of the 191st want to find the photos, they also wanted to record the medals that each man had received. In this they also succeeded. Now these men are working to find higher quality photos for display in the Education Center at The Wall.

“This mission is so important,” said VVMF Founder and President Jan Scruggs. “The photos teach people that these were real people, with hopes and dreams, not just names on a wall. Thank you so much to the men of the 191st AHC Association; because of your effort, the faces of these men will never be forgotten.”

“We all gave some, but they gave all”

← Meet Mitch: A Hero Dog
A Woman On A Mission: Janna Hoehn →

2 thoughts on “191st AHC Association Completes the Call for Photos”