My father was a World War II veteran in the Army Air Corps and spent more than two years overseas mainly in the South Pacific. My uncles were all WWII veterans. I grew up in a little town in Nebraska where Legion and VFW clubs were the centers of the town activities. It was our responsibility to serve our country. You didn’t question it. It was expected of each of us. 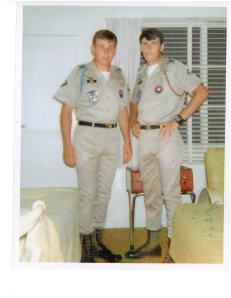 My brother Tom, now a professor at the University of Dayton and municipal court judge, and I both volunteered for the draft in 1967. He was one month behind me in basic training at Fort Bliss, advanced individual training at Fort Ord and Vietnam. We both had orders to go to Germany, but both volunteered to go to Vietnam. We were assigned to different units when we arrived in country. He ended up near the DMZ with the 11th Armored Calvary under Col. George S. Patton, and me with the 9th Infantry Division in the Mekong Delta. We put in for transfers to be with each other, knowing that it would probably never happen. A month later, he walked into my base camp in Bien Phouc (2nd Battalion of the 47th Infantry) and we were together, side by side, same squad, for the rest of our service in Vietnam. I left in December 1968 and Tom left in January 1969. 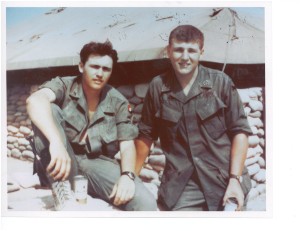 No one ever goes through the experiences of war and combat and not have it shape you in ways you don’t even realize. It impacts every fiber of your being. My attitude about committing a nation to war, asking our men and women to make sacrifices that no other Americans will ever be asked to make, is a deadly serious decision. War is not an abstraction. Before a nation goes to war, many tough questions need to be asked. It’s easy to get into war, but no so easy to get out of war. America has lived through this agonizing scenario for the last 11 years and we are still bogged down in the longest war we’ve ever fought.

Most of our civilian and military leaders—Gen. Eric Shinseki, Lt. Gen. Greg Newbold and a few others being rare exceptions— forgot the critical leadership responsibilities of question, probe and challenge all assumptions about going to war beginning with intelligence. Colin Powell’s rules of engagement, the Powell Doctrine, that came from his two tours in Vietnam as a young infantry captain and major were disregarded, especially his last rule: what is your exit strategy?

Most Americans strongly support, admire and respect our military. In Gallup’s annual survey of the 15 leading institutions in America, the military is still the only institution held in high regard by the American people. No other institution is even close. But most Americans have very little understanding of the military. How could they? Most of society has been disconnected from military service since 1972, the beginning of the all volunteer military force, which I supported then and still support. 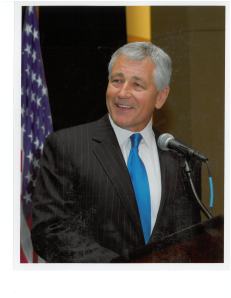 No matter the war, no matter the politics, a nation must always recognize the men and women who served their country and the tremendous sacrifices they and their families made. To have the Education Center at The Wall, which I authored the authorizing Congressional legislation for, include the veterans of the Iraq and Afghanistan wars is a unifying gesture, recognizing veterans from America’s three longest wars. It is appropriate and it is an American thing to do, paying tribute to those who embodied our country’s most important and lasting values; integrity, duty, honor, loyalty and courage.

Senator Charles “Chuck” Hagel served as the deputy administrator of the Department of Veterans Affairs from 1981-82. He was elected to the Senate from Nebraska and served from 1997-2009. In 2009, he was appointed as co-chairman of the president’s Intelligence Advisory Board and currently serves in that position.

← Reading of The Names
Healing Continues at The Wall →